In 1968 a Marine Biologist who taught science at a junior high school in Fredonia, New York USA, took a personal interest in a few of his students’ advancement. One of the advancing students was Brad Follett. In April of 1968, a project for cleaning up a small portion of the Canadaway Creek in Fredonia, N.Y. of debris and trash commenced; then the arranging spawning areas, the taking of water, sediment, and embankment soil samples for testing took place. Later that June, a whole week on the creek project with students from Fredonia State University enlarged the scope of the project.

On the last day of the project Saturday, June 29th, 1968 it was realized by Brad that it was a lot of fun but yet very hard and rewarding work with much more to do, not only on the creek but on a global scale. That young junior high school student made a statement to his peers to the effect…” this will take a month of Sundays to do”. He then inquired of his teacher …” but the whole earth needs to be cleaned up doesn’t it? The teacher empathically stated yes, as the student responded….” there should be a global cleanup month”. This is when the term “global clean-up month” was coined, but never became fertile as desired or needed. Little did Brad know then of the real world around him and what lay ahead over many years. (This was 22 months before Earth Day)

Brad had worked on projects for several years now and by April 1970 he was a freshman at Fredonia High School. He had knowledge of the oil spill off the coast of Santa Barbra California as well as the burial ground for hazardous waste at Love Canal in Niagara Falls. N.Y. which was visited. He knew of the efforts of Senator Gaylord Nelson from Wisconsin State, and that Denis Hayes was selected as the National Chairman organizing the event called a “national teach-in” to be held on Wednesday, April 22, 1970. This was to be called Earth Day and to be held every year on April 22nd.

After a couple of years on environmental projects, the Canadaway Creek once again came up for its clean-up and associated project work. While on the project Saturday, April 4, 1970, Brad reflected back on his previous statement towards global clean-up month and on the personal knowledge gained related to environmental events and science. He stated to his peers that Global Clean-Up Month was ok and that Earth Day was going to be great, but wouldn’t it be great to have it for a full month? This was the founding of Earth Month as it was then.

Earth Month is non-political, is not a holiday and no flag is to be made of it. It is a month to develop momentum for one year worth of work. Our slogan is "Earth Month is Every Month."

"In Recognition of Johnathan Nez, President of the Navajo Nation for his leadership in crisis:

This Award of Excellence is presented to the brave people of the Navajo Nation in working together ‘Ahił Na’anish’ for Protecting Public Health by overcoming adversities in the face of the SARS COv-2 virus, and preserving their cultural and historical heritage, to further build upon their natural, physical, social, and economic environs with a sustainable future for generations to come.

The Arizona Education On The Environment Prospectus was Revised. Do you know what your State or School is really teaching? This publication can be applied in all States. 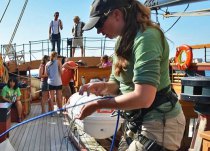 Remember to Send us Your Photos and Videos of environmental events.